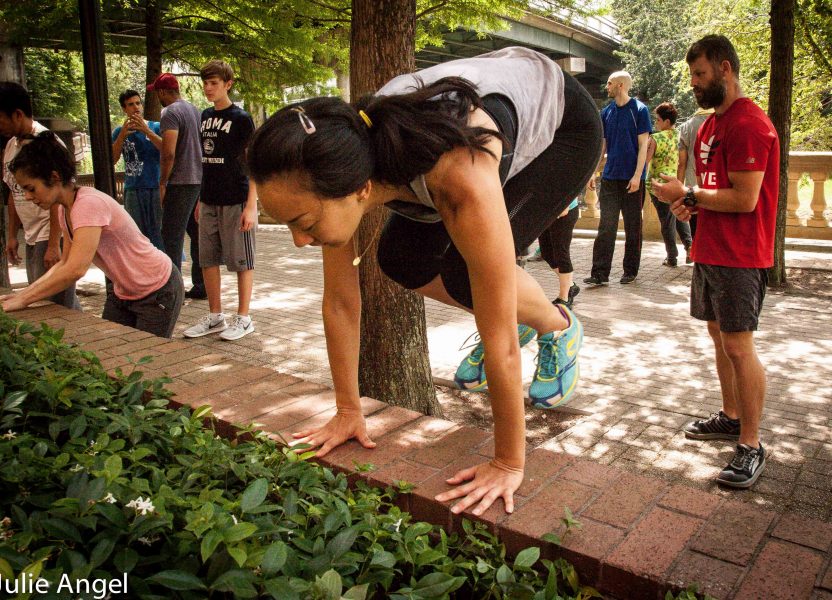 May 27, 2015 | Posted by admin | Everyday Thoughts | 1 comment |
How to encourage and broaden participation. There’s no ‘one size fits all’ solution to the question of how to broaden the demograghic of who is training. Local contexts matter, what worked in one place may not work elsewhere but some ideas maybe worth thinking about and trying. In my experience it is the entry point that is the barrier for a lot of people due to numerous factors.  A lot of the time people don’t know what the training will be like, what they’ll be asked to do and if they are ‘fit enough’ to keep up. Being that person at the back, the last to arrive on the run, the least able isn’t an encouraging prospect for many. These concerns are in no way gender specific.

As a coach you know you’ll make them feel able, scale the tasks to suit them, make them feel respected, the problem is they haven’t met you yet. However, it is mainly due to pre-conceived ideas formed from visual media, which predominantly shows young guys with incredible athletic abilities. If that’s the majority of what you see then you may not think it’s for you. There’s a balance to be struck between using inspiring imagery and relating to and realising someone’s potential. If you can’t get people to turn up you’ll never change their perception and have the opportunity to share something with them. A few years ago in London a ‘beginners class’ was created. There were both far more women and older participants who went to this than the ‘all levels’ class. I attended both on a regular basis, and there was no difference in the training whatsoever. Training was scaled to the participants, and coaches did their job, they coached. It’s as much a game of perceptions as anything else, the label ‘beginner’ provided a sense of reassurance to the participants. In activities that potentially challenge people mentally and physically it is important to facilitate an environment that allows for individuals to test their limits and feel supported whilst doing so.

There’s a lot of push back for providing ‘only this group’ types of training, e.g. female only training environments. Interestingly the pushback isn’t nearly as strong when it’s ‘over fifties’ or ‘advanced’ groups. Some people perceive it to be divisive when what they want is to be inclusive. Again – if you cant get people to turn up they’ll never get to experience any of it. I’ve yet to meet any women who have started in a female only environment who have exclusively remained in that. In general after a few weeks of mixed training people get comfortable with the reality of the training and also the trust in the group and coaches in how they conduct themselves. You are providing an option, not everyone needs this, but are you in with a chance of reaching more people? Yes. Another common concern – do you need to have a female coach to run a female class? The fact that there are other women in the group can matter more to the participants than the gender of the coach. Does a female coach add a different level to it? Yes, in my experience it does, but that shouldn’t be something that stops you from creating this option. It’s a disservice to a good coach. Do you need a coach who is over 50 to run an over 50s class? No. Same logic applies.

I know some groups internationally who have very healthy female participation rates, particularly with women in their 30s, 40s and 50s. They achieved this by networking at events, giving presentations etc. where they were talking to that demographic. It’s amazing if you go to those groups and specifically communicate the message that ‘yes this is as much for you as it is for me’, people will be receptive. If you don’t tell them then they don’t know. Who are you talking to? Regardless of the intention, the addition of ‘all levels welcome’ unfortunately holds little value to many when society continually reinforces images and messages to suggest that factors such as age and gender, to name a few, have different associated attributes. If everyone is able in some way then talk to them and show them.  Consider where you promote your activities and what your marketing looks like, what images and videos do you like or share? All these factors contribute to creating an image of the services you offer. A principled stance is just that, at the end of the day take a look at who turns up, that’s the hardest bit for most.