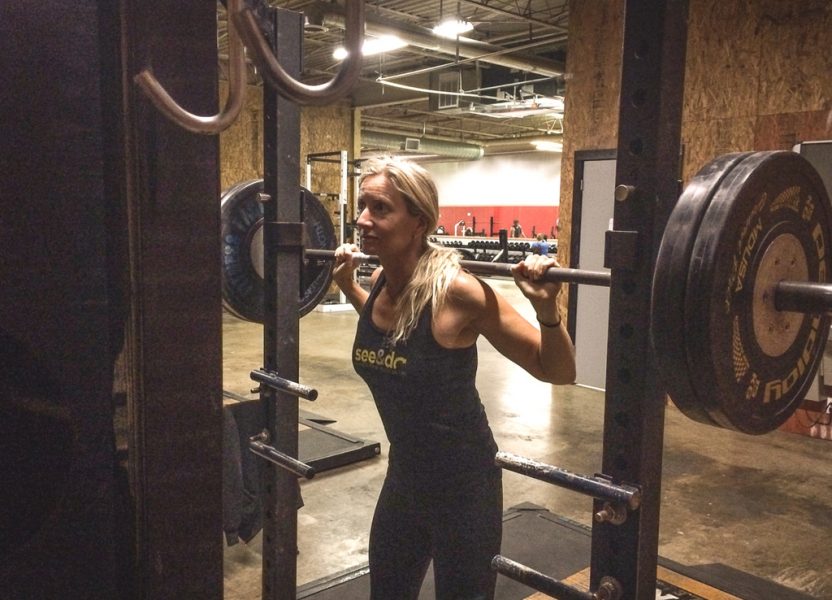 May 27, 2016 | Posted by admin | Everyday Thoughts, Lifestyle | 0 comments |
By the time Chainstore opened in February 2013, my friend Emmet had finally persuaded me that weightlifting would be a fun thing to try. While almost everyone else was swinging on the scaffolding on opening night, I was first in line to try the squat rack, and I pretty much fell over myself to sign up to the Power 101 strength training course. I haven’t looked back. I’ve learned so many things. You’d think that lifting weights would be lifting weights, but no. As well as basic strength and conditioning, there are multiple sports that involve barbells, and they’re all quite different: Powerlifting – these guys compete in three lifts – the squat, the deadlift and the bench press. There are different types of powerlifting, but let’s not go crazy here. We know it’s not Olympic weightlifting or bodybuilding, and that’s quite enough specialist knowledge, thank you. Olympic Weightlifting – these dudes only compete with two lifts – the snatch, and the clean and jerk. These both involve lifting as much as possible directly above your head, which couldn’t possibly ever go horribly wrong. As an assistance exercise, weightlifters will squat, but don’t go thinking they’re powerlifters. They’re totally not. Bodybuilding – I don’t really know what these guys are doing but it involves a lot of protein powder and very little clothing, and at some point they lift weights. I suspect they squat. They’re still not powerlifters. Strongman – all I know about this is that there are people who pull trains, and that’s a sport. They probably squat. They can call themselves powerlifters if they want, because who’s going to argue with someone who can pull a train? Sometimes people lift weights even though they’re not weightlifters or powerlifters or bodybuilders. This is because being strong is awesome, and various lifting techniques can help with other sports – a lot of parkour people do squats (but are not powerlifters. Basically, everyone squats, but only powerlifters get prizes for it, the smug bastards). Strength training also incorporates stuff like pull ups, box jumps and other bodyweight exercises. Yes, that’s right. It’s those scary things that people do in gyms, with weird metal objects, giant elastic bands and lots of grunting. With something like parkour or running, starting out can be hard if you’re not already quite fit. You might feel like it’s taking a long time to see improvement. Sometimes, you’re not even entirely sure whether you’re improving at all. With lifting, it’s the opposite. If you start as a complete beginner, you see really fast gains every week – super n00b gains. Basically, the weaker you are, the more fun it is when you’re starting out. After the initial mutant growth, you then start to level off and can no longer increase your lift weight every five minutes. By this time the super n00b gain period is over you are hooked, because following a consistent program of strength training shows you progression like nothing else can. There are objective measures – broad jump tests, maximum lift weights, number of pull ups in a set – to test whether what you are doing is working. Goals like “I want to squat my bodyweight” or “I want to do a pull up with a 5kg weight” no longer have to be distant ideals that you really want to reach one day, somehow, if you just work hard in some vague way, and it might be tomorrow or it might be in five years. You can realistically set an objectively measurable goal, assess exactly how to get there, and quite possibly even figure out how long it should take. To someone like me, who spent forever wanting to be able to do a pull up, this is like magic. Months of unfocussed and occasional attempts to work towards a pull up were frustrating and depressing. Planned, focussed training with a resistance band? Yeah, a few weeks later and I had it. Consistency is key, however – if you just go in and do a few squats every now and then when you feel like it, you won’t get the gains that someone following a carefully-planned program will.

When you start parkour, People show you how to do a fiddly-looking acrobatic technique, show you some progressions and tell you to practice. Simple. When you start doing squats – which is basically crouching down and standing back up with a thing on your shoulders – it suddenly gets pretty complicated. What training cycle phase are you on? What’s your program? Oh, Texas Method? Why not 5, 3, 1 or Russian Squat Program? Jesus Christ, people. How hard can it be? Well… actually, programming and all this stuff is a thing, and it makes a difference, which relates to the point about consistency. It turns out that while working hard is extremely important, so is working smart. You can’t turn up every session and keep lifting the highest weight you can over and over and not die. I know this, because I’ve tried it, despite more experienced people patiently explaining that I’m going to burn out and fall over. Despite the fact I react to the word “deload” (which is when you reduce the amount of weight you are lifting temporarily in order to allow you to recover) like some dogs react to the word “bath,” you do actually have to plan these things, and have periods of heavy and light and tapering (no, I don’t know what that means either). Overwhelming? Complicated-sounding? Yeah. Get help from someone who knows what they are doing. Additionally, while squats or deadlifts might be fairly simple techniques to learn, not all lifts are the same. People seem to think that weightlifting is all pure strength, with no technical skill required. Not true. Cleans and snatches (especially snatches) are incredibly complex. It’s like trying to learn a difficult dance move, only your partner is a heavy metal bar with some giant rubber plates stuck on each end. I’ve spoken to a fair few women who are quite edgy about training with barbells. There’s a prevalent stereotype that it’s for big, strong guys who can lift huge weights, and that those guys are egotistical bullies with brainpower inversely proportional to muscle mass. I will never understand where this comes from. I’m not going to pretend I never feel a moment of intimidation when I see some massive monster of a man smashing a barbell more than double my bodyweight into the floor, but they are actually gentle giants, with hobbies like Go, piano, juggling and neuroscience. I am yet to be mistaken for a protein snack by any of them, despite my fears. They’re the ones who will check your form, and spot you to make sure you’re safe. As a 56kg woman, I lift a fraction of what they do, but they don’t laugh. Lifts are all relative to bodyweight, and they don’t see small-person lifts as inferior – there’s a reason that lifting sports have weight categories. And speaking of bodyweight, lifting will cure you of being shy about it. I think I know more peoples’ bodyweights than names at this point. It came as quite a shock to me the first few times someone casually asked what I weigh (56kg right now, in case anyone cares), but I don’t feel self-conscious about it now. I tend to think of it as the number of kilograms I can assemble into a badass weightlifting BEAST, ready to do battle with heavy objects. Why yes, I do have issues, thank you. After lifting for about a year, I feel better about myself than I ever have, despite the dreaded “but what if I get bulky?” question. Personally, I’ve never cared about it, but I have genuinely had people tell me to be careful that my shoulders don’t get big. Firstly, I look pretty normal after a year of lifting. Secondly, if you gave me a choice between jumping further, climbing better and deadlifting over 1.5 times my own bodyweight versus looking really skinny, guess what I’m going to choose? Damn right I’m happy to have big shoulders if it means I can bust out pull ups. I’ve also spoken to people who assume strength training, weightlifting, powerlifting or whatever isn’t for them because they aren’t strong. Guess what, though? People do not lift weights or strength train because they are strong. They are strong because they train. Are you really weak? Are you going to struggle to squat an empty bar? Brilliant. You’re going to get so much out of this. Don’t ever be afraid to get strong. It’s something you cannot possibly regret. It might sound like a lonely activity, repeatedly picking something up and putting it down again, but if other people are around then it’s surprisingly social. It’s nice to have others around to support and cheer on. It’s exciting to see people get a personal best. It’s also reassuring to have more experienced people who can notice issues with your form, or spot you if needed. If you don’t have a friend to lift with, don’t be shy. I would definitely recommend having someone teach you how to use weights properly, but when you’re training on your own, gyms are actually very friendly places and it’s surprisingly easy to find lifting buddies. Don’t forget what it’s like to be new and nervous, though. One day you’re going to see someone walk towards the free weights for the first time, self-conscious and unsure, and you could make a world of difference to them with a simple smile.